Professor David Walker, distinguished architectural historian and former Chief Inspector of Historic Scotland, was awarded the Nigel Tranter Memorial Award for 2016 by The Scottish Castles Association. Lord Steel presented Professor Walker with the award at the Barony Castle Hotel in Peebles, on the occasion of the 20th anniversary of the Scottish Castles Association.

David Walker joined the Scottish Office as Senior Investigator of Historic Buildings in 1961 under the conservation architect Ian Lindsay and remained there until 1993, latterly as Historic Scotland's Chief Inspector. He was Honorary Professor of Art History at the University of St Andrews from 1994 to 2001, and acted as an expert advisor to the Heritage Lottery Fund from 1995 to 1999.

He is the author of numerous articles and volumes on Scottish architecture, including the first chapter of Restoring Scotland’s Castles edited by Scottish Castles Association member Robert Clow, in which he described and championed the history of castle restorations in Scotland. David Walker was instrumental in setting up the Dictionary of Scottish Architects, a comprehensive online resource which is of great value to researchers. 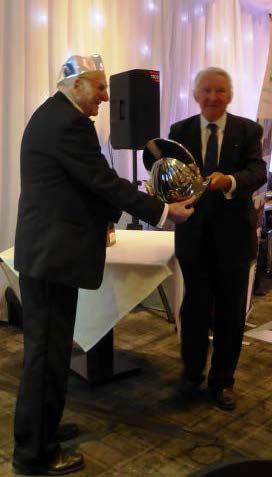 David’s list of publications is long; another chapter of his which relates to Scottish castles is in a festschrift to Stewart Cruden, where he explores the work of MacGibbon and Ross in great detail; in fact the fascinating entries on both MacGibbon and Ross in the online Dictionary of Scottish Architects were written by David Walker. David also contributed the last chapter in Renewed Life for Scottish Castles edited by Alan Rutherford and Richard Fawcett. His knowledge of Scottish castles and his contribution and commitment to their care and restoration is immense and his acceptance of the Nigel Tranter Memoeial Award is very fitting in this 20th anniversary year. It reflects well on the Scottish Castles Association, with our history of recognizing and honouring distinguished castellologists.

The Nigel Tranter Memorial Award is awarded annually to an individual or group whose efforts have contributed significantly to an area of interest to the Scottish Castles Association and its membership.