Glenlyon is Scotland's longest glen, some thirty miles in length. Many a tourist has travelled along its long and narrow winding road, mainly single track, only to find that the road ends, and they are forced to travel all the way back.

Glenlyon is situated in the highlands of Perthshire, sandwiched between Loch Tay and Breadalbane to the south, and Loch Rannoch and Atholl to the north. At the mouth of the glen is the picturesque village of Fortingall, famed for its thatched cottages and ancient Yew tree (3,000 to 5,000 years old, depending on which expert one listens to).

Legend has it that Pontius Pilate was born here, whilst his father was part of a diplomatic embassage for the Roman Empire. The glen has been of great importance in the past and has many ancient forts. Dun-mac-Tuathal, a vitrified fort, defends the approach to the glen and also to Loch Tay. This is largely ignored today (planted over by the Forestry Commission) but the locals traditionally referred to it as the "Roman camp". 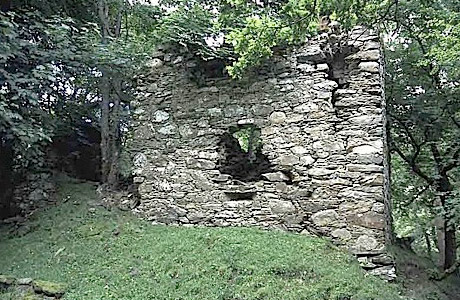 Three miles from the entrance to the glen, and above the road and river Lyon, lies CARNBANE CASTLE. Writers often overlook this small fortalice. Today the castle is a shadow of its former self, hidden by trees. The castle is dramatically situated with the land falling away on three sides, whilst the entrance is protected by a large ditch.

Carnbane is described in 'The Lairds and lands of Glenlyon', published in 1886, by Duncan Campbell, a native of Glenlyon. He describes it as "...a square, or rather oblong, tower, vaulted and loopholed, with a wide hospitable looking chimney in the west gable, and a round tower with cork-screw stair butting out from the adjacent side".

The date of Carnbane's construction is unknown. It is believed to have been built by Duncan Campbell of Glenlyon, otherwise known as "Donnachadh Ruadh na Feileachd" or Red Duncan of the Hospitality (a rather unusual style for a Campbell). His date of birth is also unknown, although it is recorded that he died in 1580. Duncan's hospitality was apparently well known, even as far as Ireland. An Irishman, known as the "Bard of Gorrie", paid Glenlyon a visit and stayed at Carnbane. It is recorded that the Laird and the Bard feasted on "A fat bullock, and six wethers, with red deer and other game, were daily provided for in his Hall". It is a wonder that Duncan was not known as Duncan the Gross, if this was his daily table.

Carnbane did not last for long. Shortly after Red Duncan's death the castle was destroyed by "a party of Lochaber men", who shot a burning arrow into Carnbane's thatched roof. Red Duncan's son, Sir Colin (or Mad Colin), does not appear to have restored the castle. Instead, he built Meggernie Castle, further up the glen, in 1582. Surprisingly this new castle was built in a less defendable spot. 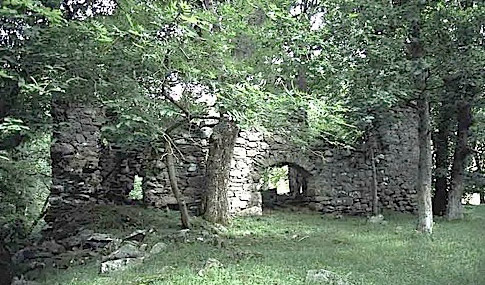 Carnbane was built in almost three equal sections. Although Duncan Campbell describes a tower, there is no evidence of this. The structure that stands today is clearly a Hall House, measuring 15m in length and 7.5m in width. This structure is well defended; each wall has a gunloop, including one in the courtyard. There is no evidence of the vaults that Duncan Campbell describes. The walls are only 1.5m thick. Most of the front wall has gone but the springer for the arched door is still visible, this matches the door in the inner wall. The remaining front corner of the first floor still retains a garderobe, the inner wall of which has an aumbry, possibly for water, moss or some such item, while the outer wall of the garderobe has a small shot hole. The round stair tower that Campbell describes is now a small pile of rubble. This would have been the entrance to the accommodation. The hole that once took the drawbar is still in situ, although the doorway has long since gone. In the wall in front of the doorway is a defensive slit and a short distance from this is a gunloop.

The castle was destroyed by a party of Lochaber men, who shot a burning arrow into Carnbane's thatched roof

The Courtyard is 7.8m wide. There is no evidence of any structures within the courtyard. The third section was a secondary or ancillary building measuring 8m by 16.5m, slightly longer than the hall house. Today the only evidence of this building is the undulations in the ground, indicating the position of the foundations. Campbell does not describe this structure, so one must presume that it has been gone for a long time. This building may have provided storage facilities, stabling and / or guest accommodation.

Trees do not only surround the castle; it also has a number of large specimens growing within the building. In fact one tree might be helping to hold up the east gable wall. This has been a fascinating building and it is long overdue for an archaeological investigation.


Article by Stuart Morris of Balgonie

Actually I have a genealogy that says Red Duncan was born about 1516 and died 17 January 1578. The first stones were reportedly laid on the 4th July 1564. This would have been in the middle of the original Campbell-MacGregor feud. Before that the Glenlyon Campbells were at Innerwick. How to explain the gunloops at this early period?