Dunnottar Castle to close whilst Kinneff Manse is for sale 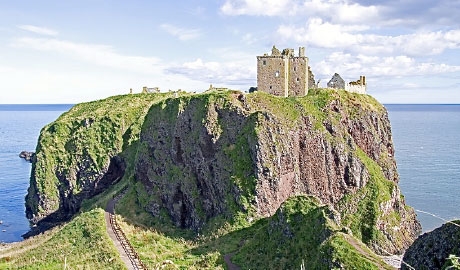 Dunnottar is to close while repairs are made to the roof of the gunlooped Behnolm's Lodging which flanks the entrance.

The castle made the headlines recently after a competition to discover an 'eighth wonder of the world'. That, together with the fact that it was the inspiration for the castle in Disney’s 'Brave,' had led to an increase in visitor numbers.

Notice of the closure was posted the same day as the Manse of Kinneff Kirk was offered for sale. This coincidence provides an opportunity to recall the link between Kinneff and Dunnottar - and connected they certainly were.

Dunnottar was the last castle in the British Isles to fall in the the Wars of the Three Kingdoms, commonly known as the Civil Wars.

Edinburgh Castle had surrendered in 1650 to be followed by Stirling Castle in 1651. The only major fortress left in Scottish hands was Dunnottar under its governor Sir George Ogilvie and a garrison of 70 men. The 'Honours of Scotland' (the crown jewels) were placed under his protection for safety.

Dunnottar was closely besieged by Cromwell's army. Due to its inaccessible position it was prolonged affair but after 8 months the end was in sight. Anxious that the Honours should not fall into Cromwell's hands they were smuggled out of the castle hidden in the skirts of the wife of the local minister - right under the noses of the besieging English. She and her husband buried them beneath the floor of Kinneff Church and for 8 years they remained undiscovered.

On the 24th May 1652 the castle surrendered and Sir John Ogilvie (along with his wife)  was thrown into prison until he disclosed the whereabouts of the crown jewels. He never did.

The Honours were returned to the King at the restoration. John Keith, the younger brother of the Earl Marshall, took the credit and was rewarded with the Earldom of Kintore while the minister and his wife were ignored. When Charles discovered the truth he ordered the Scottish Parliament to pay the minister 2,000 marks in compensation - he never got it!

Dunnottar Castle as seen from the approach