Stirling castle has trumped the Tower of London and Houses of Parliament to be rated the UK's favourite heritage attraction by consumer group Which?

The castle, once home to Mary Queen of Scots, received top marks in the survey for customer service, value for money and the quality of information provided to visitors.

Highlights include a set of replicas of the Stirling Heads, 16th century carved images depicting royalty and figures from the Bible and mythology. 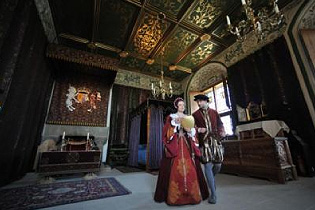 The castle, run by Historic Scotland, is also home to James V's palace, said to be one of Britain's best-preserved Renaissance buildings.

Stephen Duncan, tourism director at Historic Said, "It's fantastic to see the response by visitors who have visited the case in their hundreds of thousands since the reopening of the palace and to be recognised as the UK's favourite heritage attraction is a huge honour and testament to the hard work of all the team".

Which? Members wee asked to score the attractions they had visited in the past two years.

They were rated across categories including value for money.

The survey is published in the September issue of Which? Travel magazine.