Wallace's Tower (aka Benholm's Lodging) - Finding a use at last? 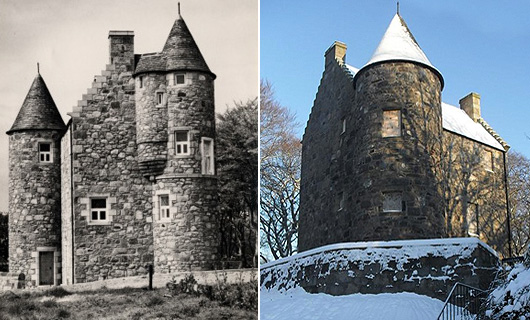 Wallace Tower (after the move - and now)

A Community Group is one step closer to reviving an Aberdeen Landmark after a visit to the empty relic.

The Tillydrone Community Development Trust was finally able to tour the Wallace Tower after months of attempting to gain access to the site.

Chairman, Ross Grant, insisted the visit would help the group, which is in process of gaining charitable status, to breathe new life into the derelict structure.

"It's an important step for us because only one of our members had seen the Wallace Tower before, and now we know what's inside, and what space there is," he said.

"When we are discussing our business plan we will actually have a better idea what 's possible."

Mr. Grant said the Group would be looking to apply for the lottery heritage cash to rejuvenate the tower - which was built in 1616 in the city centre before being dismantled and rebuilt on Mole Hill, Tillydrone, in 1963.

Displaying historical collections and art exhibitions are among the possibilities being considered.

A city council spokesman said: "Representatives of the Council met local residents who had expressed an interest in the redevelopment of Wallace Tower. Staff took part in discussions about potential uses for the tower, and look forward to continuing this dialogue in the future".

The trust plans to hold a public consultation before making a final decision.