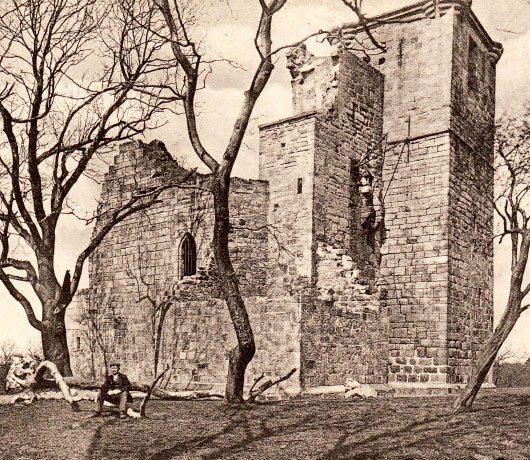 Crookston circa 1900 after consolidation.

Crookston stands high on a hill within the housing scheme of Pollok, Glasgow. It is a tower house of the late 14th century consisting of a massive oblong block flanked by 4 corner towers. The basement is rib vaulted and the quality of the masonry throughout is outstanding. The entrance was protected by a portcullis which was worked, surprisingly, from a window recess in the hall above. The castle stands within a 12th century 'ring work' of an earlier castle: that of Robert Croc, hence the name 'Crocs Town'. 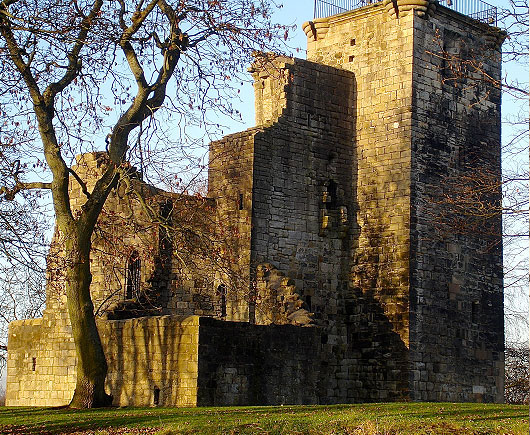 Crookstone 2013 in care of Historic Scotland

Corner tower surviving to full height at far right, with the basement of its twin to left. Main block, with pointed window at hall level, centre. Behind were the twin towers destroyed in siege. Note the thickness of the walls of the main block.

Time has not dealt kindly with Crookston. In the 1489 two of the corner towers were brought down by the guns of James IV which resulted in the castle being left with a most lopsided appearance. In 1544 it was attacked and captured only to be abandoned soon afterwards. In the late war, due to its elevated position, the upper works were reinforced with concrete to convert it into an air raid warning post. This, and its location, have combined to make Crookston one of Scotland's least known (and loved) buildings. This is to be regretted as Crookston is a superb and unique example of a Scottish castle.

It was taken into care of the National Trust in 1931 and is now under the protection of Historic Scotland.

Article Note: Writer's first castle and the start of a lifetime's interest